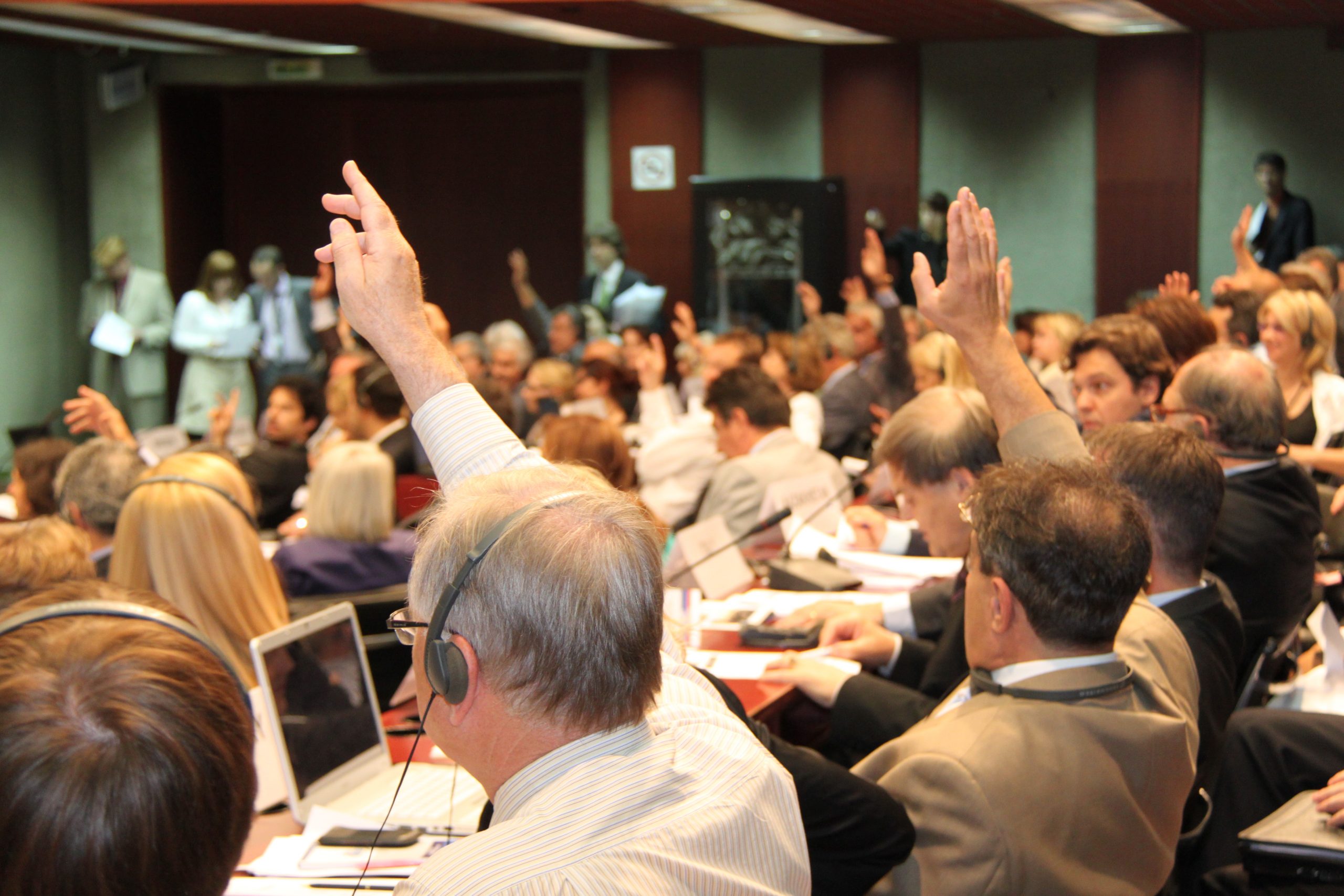 Citizens as shareholders of the European project: what’s next?

Europe Day, 9 May 2022, marked an important milestone of the Conference on the Future of Europe (CoFoE) as citizens handed over the results of their hard work to the EU institutions for follow-up. CoFoE, the first ever pan-EU deliberative democracy experiment, gave citizens from across the bloc the unique opportunity to set out proposals for how they want the EU to function and what they feel it should focus on. The Conference was an unprecedented exercise that shed light on the great potential of pan-European, direct involvement of randomly selected citizens in the EU policymaking process. If properly followed up by the European Council, Parliament and Commission, it could set a precedent for a bold and properly democratic system that is fit for the 21st century and could help regain citizens’ trust in democracy.

On 31 May 2022, Friends of Europe organised an online Policy Insight event, ‘Citizens as shareholders of the European project: what’s next?’ The aim of this debate was to discuss the EU’s deliberative democracy experiment and its contributions towards a Renewed Social Contract that is fit for the 21st century.

The debate brought together citizens who participated in the CoFoE process from September 2021 until May 2022, a top European institution representative involved in the Conference, academics, citizen participation experts and civil society to discuss possibilities of mainstreaming participatory exercises at a European scale and identify lessons learned from the CoFoE, in particular.

The CoFoE represented the first of a series of important steps towards increasing European citizens’ political agency and striving for greater equality, fairness, and respect for values and ideologies on the continent and beyond. A priority for the European institutions now is to prepare and work towards the feedback event in autumn 2022.

Beyond the role of citizens in EU decision-making, the panel discussed the growing role of civil society, cities and new localism to increase grassroot political participation across Europe and strengthen citizen agency.

While the panel acknowledged the flaws of the process, it suggested that the success of the Conference ought to be measured by the quality and quantity of the recommendations drafted by the citizens, and whether these ideas become ‘contagious’ and gain momentum beyond the experiment. Though deliberative and participatory process are nothing new in the European political landscape, the scale of this exercise was acknowledged as the factor rendering CoFoE unique and worth piloting.

Professor Alberto Alemanno, Founder of The Good Lobby and 2014 European Young Leader (EYL40), claimed that 21 out of 178 CoFoE recommendations require treaty change, some of which – including a possibility of institutionalising citizens assembly and new electoral roles – would be game changers for European democracy.

Professor Kalypso Aude Nicolaïdis of the European University Institute School of Transnational Governance shared her views on the need to change the “narrative” around what democracy means; the new narrative could be much more participatory and deliberative, with mini-publics being “normalised” and “institutionalised” within existing political processes.

Additionally, there is a need to join up deliberative processes happening at local, national, regional and European level. Establishing networks and connections between deliberative experiments, as well as existing political processes and institutions, will be key. A European framework is required to link all local participative experiments together, so why not establish a permanent Conference on the Future of Europe?

It seems leaders across the continent are beginning to realise, albeit slowly, the importance of being more responsive towards citizen concerns and open to engage in specific issues. Citizens are concerned about their future and fair transitions, and the need for deliberative conversations comes as a trade-off. The role of citizens in the European landscape is changing and the momentum needs to be maintained.

With ‘citizens as the guardians of democracy’, it is important that the recommendations emerging from the CoFoE are meaningfully followed up upon and that the institutions are held accountable. After all, this is about the survival of European democracy and creating a valid precedent for future political systems that are trusted by citizens because they are able to reply to the global challenges of the 21st century.

The time has come for the European Union to embrace new forms of democracy and to place citizens at the forefront of the process. The EU’s deliberative democracy experiment, embodied by the Conference on the Future of Europe (CoFoE), gave citizens from across the bloc a platform to set out proposals for how they want the EU to function and what they feel it should focus on. This is a unique opportunity to shed light on the fundamental importance of permanent and direct involvement of randomly selected citizens in the European policymaking process and for citizens to debate Europe’s challenges and priorities.

Climate change, health crises, war, disinformation and the growth of extreme politics are but a few challenges facing Europe for which lasting and innovative solutions need to be found. By committing to listen to Europeans, the European institutions are bringing the continent closer to the establishment of a new ‘social contract’ fit for the 21st century, one where the European Union works in closer symbiosis with its citizens, seeking sustainable and inclusive solutions and acting on their recommendations.

Although the EU achieved an unprecedented democratic exercise by giving a voice to citizens, what happens next will determine the success or failure of the CoFoE.

Citizens have expressed concerns that there is a lack of political commitment, which leads to fears that their proposals will not be adequately followed up on. A failure at the decision-making level to pick up the recommendations will jeopardise the democratic legitimacy of the initiative and risks further damaging citizens’ trust in European political processes and transparency. On the other hand, if embraced, many of the recommendations would be game changers for the EU’s democratic character.

This Policy Insight debate discussed the possibility of mainstreaming such democratic exercises and identified lessons learnt and areas of improvement for future iterations of pan-European participatory processes.

For this debate Friends of Europe, together with its citizen engagement platform Debating Europe, welcomed European citizens as well as representatives from EU politics, academia, the private sector and civil society. Speakers and participants reflected on the delivery of the conference, mapped a way forward for necessary follow-ups, and identified lessons learnt and areas of improvement for future iterations of pan-European participatory processes.

Co-Founder and CEO of Participation Factory

Kalypso Nicolaïdis is professorial Chair of Global Affairs at the EUI School of Transnational Governance in Florence, where she convenes the EUI Democracy Forum. She has worked with numerous EU institutions, including as a member of the European Council’s reflection group on the future of Europe chaired by Felipe González (2008-10). Her research revolves around internal and external aspects of European integration as well as global affairs, theatres of recognition, democratic theory, transnational legal empathy and social solidarity, global governance and international trade, sustainable integration, post-colonialism, myth and politics and the import of new technologies on international relations. Her last books are: A Citizen’s Guide to the Rule of Law – Why We Need to Fight for the Most Precious Human Inventions of All Time (with 2021) and Exodus, Reckoning, Sacrifice: Three Meanings of Brexit (2019).

Valentina Balzani specialises in publishing. After a long and varied experience in book publishing, she became a social media consultant (Facebook, Instragram, YouTube mainly) for both individuals and companies. Valentina also deals with language, holding refresher courses on the Italian language (basic rules, inclusive language, hate speech, usage trends). A cultural activist, she collaborates with local third sector organisations. She was selected as a panelist for the Conference on the Future of Europe (CoFoE) and later as a representative of the European Citizens’ Panel in the Plenary. She actively promotes and disseminates CoFoE in her country.

Alberto Alemanno is a leading voice on the democratization of the European Union. He’s currently the Jean Monnet Professor in EU Law at HEC Paris and visiting professor at the College of Europe in Bruges and at the University of Tokyo School of Public Policy. His research has been centred on how the law may be used to improve people’s lives, in particular through the adoption of power-shifting reforms countering social, economic, and political inequalities within European societies and beyond. He is a regular contributor to Le Monde, Bloomberg, Politico Europe, Forbes, and Il Sole 24 Ore, and his scholarly work has been featured in The Economist, The New York Times, The Financial Times, as well as Science and Nature.

Gaëtane Ricard-Nihoul currently contributes to the preparation of the Conference on the Future of Europe as a Member of its Common Secretariat. She has held various positions as a European official. The former deputy and acting head of the European Commission Representation in France, she has previously worked for the French Ministry of Foreign Affairs, as deputy secretary-general for the citizens consultations on Europe and then head of department at the Mission Grand Débat. Ricard-Nihoul is the former secretary-general of the Jacques Delors Institute in Paris and served as an advisor for the Belgian government on European affairs.

Max Steuer is Assistant Professor at the Department of Political Science at Comenius University in Bratislava, Slovakia, and at the Jindal Global Law School at O.P. Jindal Global University, India (on leave in Spring 2022). A member of CoFoE ECP 2, his research focuses on democracy studies and includes constitutional adjudication in a comparative perspective, freedom of expression, militant democracy, and EU constitutionalism. He published in peer-reviewed journals in law, political science, sociology, and European studies and was visiting researcher at several academic institutions including the WZB Berlin Social Science Center and the University of Oxford.

Pronouns: he/him
Joe is the Editor-in-Chief of Debating Europe. He has been active in the EU blogosphere since 2008. Before starting work for Friends of Europe in 2011, he worked as a freelance journalist in the UK and Brussels, and edited BlogActiv.eu, a dedicated EU blogging platform. A part of Friends of Europe, Debating Europe is a successful online discussion platform based on a simple model: citizens ask questions, policymakers and experts respond. Since launching, it has built a 6+ million strong community of citizens and a social media following of over 271,000 people from across Europe.