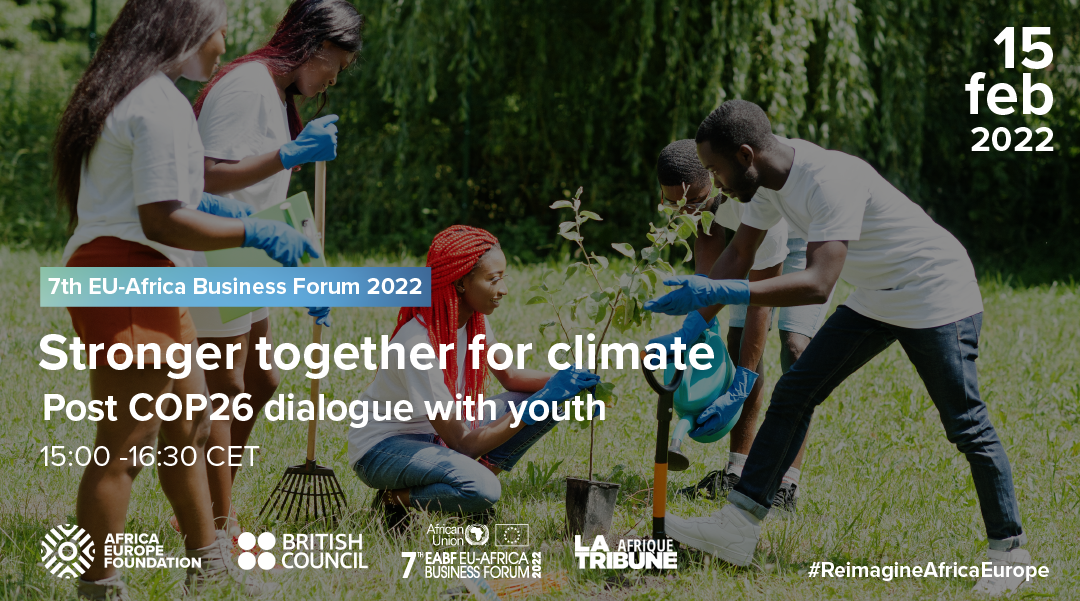 Taking place as part of the EU-Africa Business Forum (EABF2022) during the Africa-Europe week, the ‘Stronger Together’ policy dialogue will serve as a crucial side event during this week and will mark a key moment with young people from both continents and senior decision makers to feed-into the Summit and the road to COP27.

Register for the Discussion

This event will consist of a roundtable discussion focusing on the policy recommendations from young people around COP26 and looking ahead to COP27, including the outcomes of the COP26 Youth Summit in Milan and the results of a series of focus groups made up of young artists, researchers and entrepreneurs.

The event will include a speaker from the Youth Summit, participants from the youth focus groups and representatives from regional platforms working on multilateral responses to climate change.

Both the British Council and the Africa-Europe Foundation (AEF) believe it is imperative that young people’s voices are heard loud and clear in this urgent moment for our collective future. We look forward to your participation in this exciting exchange of views.

Chief Executive of the British Council

first female President of Ireland, Chair of the Elders and Honorary Co-president of the Africa Europe Foundation

Aya Chebbi is a multi-award-winning Pan-African feminist. In 2018, she became the first-ever African Union Special Envoy on Youth and is the youngest diplomat at the African Union Commission Chairperson’s Cabinet. Chebbi has founded numerous platforms, including the Youth Programme of Holistic Empowerment Mentoring (YPHEM), Afrika Youth Movement (AYM) – one of Africa’s largest Pan-African youth-led movements – and Afresist, a multimedia platform documenting youth work in Africa. She has also served on the World Refugee Council and Oxfam Independent Commission on Sexual Misconduct. Chebbi is the recipient of the 2019 Gates Foundation Campaign Award and was listed among Africa’s 50 Most Powerful Women by Forbes.

Mary Robinson is a prominent Irish politician, widely recognised as having reinvented the office of the presidency during her time as President of Ireland. Mary’s passion for human rights and gender equality have seen her in the role of UN High Commissioner for Human Rights, as well as the Secretary-General’s Special Envoy in three roles. Through the Mary Robinson Foundation, as well as her current position at The Elders, she has been a leading voice in the climate justice debate. Mary serves as Patron of the International Science Council and Patron of the Board of the Institute of Human Rights and Business, is an Ambassador for The B Team, in addition to being a board member of several organisations including the Mo Ibrahim Foundation and the Aurora Foundation.

In his current role, Frans Timmermans oversees the EU’s ecological transition making Europe the first climate-neutral continent. He started his career in the Dutch Ministry of Affairs where he served in several roles both at home and abroad. He eventually served as the Dutch Minister of European Affairs and Minister of Foreign Affairs. In between, he also gained experience working in the Commission. Prior to his current position, he was the First Vice-President of the European Commission in charge of Better Regulation, Intern-Institutional Relations, the Rule of Law and the Charter of Fundamental Rights.