The event took place in Brussels on Thursday 22 October and was held under the patronage of the Luxembourg Presidency of the EU. This event also marked the end of Friends of Europe’s 15th anniversary year.

This year’s edition looked at Europe’s many challenges, including the repercussions of the refugee crisis and the uncomfortable light it shed on the Europe of the 21st Century. In addition to dealing with the fall-out of war and poverty on Europe’s borders, the European Union must urgently implement a crash “emergency” programme of Europe-wide actions. This must address the critical need to move from austerity to sustainable growth-focused and job-creating policies, boost innovation to make Europe more competitive, and help meet citizens’ concerns on health as well as social and economic inequalities. Europe’s credibility is also at stake in its dealings with Ukraine, and in questions linked to global security and climate change.

Over 200 Ministers, senior policymakers, business leaders and top academics from all over Europe and beyond discussed these challenges outside their formal portfolios in order to help generate innovative solutions. 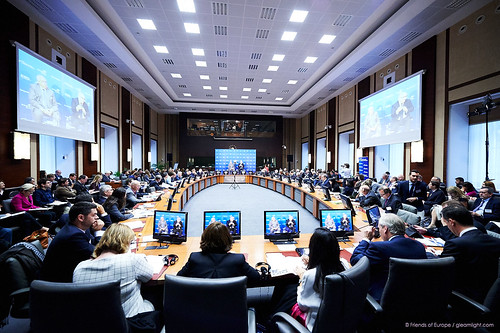 PARALLEL SESSION Smarter Europe – Catching up with the ‘Digital Era’

Is the European project unravelling, and if so how can it be knit back together again? The strains being placed on solidarity between European Union as well as eurozone members are a threat both to the single currency and to the hallowed principle of free movement of Europe’s peoples. Due to the combination of the Grexit and refugee crises, the gulf between advocates of ‘more Europe’ and ‘less Europe’ widened dramatically this year, raising stark questions about the viability of the EU in its present form. What is a realistic diagnosis of Europe’s ills, and what should be the prognosis?

Former Director of the National Consultative Committee on Racism and Interculturalism

In this ‘Asian century’, should the EU’s international priority be:

Ambassador at Large of HM Mohamed VI the King of Morocco

Is the best way to close the innovation gap with global competitors:

President of the CyberPeaceInstitute, Director of Policy at the Stanford Cyber Policy Centre and former vice- chair of the European parliament delegation for relations with the United States

To address its deepening social challenges, should Europe:

For the EU to stabilise the refugee crisis and get the ‘security genie’ back in its bottle, should it:

Researcher and Analyst specialising in the Mediterranean region with a particular focus on Libya, Trustee of Friends of Europe and 2013 European Young Leader (EYL40)

Founder of Society Against Violent Extremism (SAVE) Belgium

Author of ‘Year Zero’ and ‘Taming the Gods: Religion and Democracy of Three Continents’

Faced with global climate change, its own deepening energy crisis and low growth, should the EU:

The King, the Rock Star, the Viscount, the Comedian, the Prime Minister and the Young Leader

Chair of the World Health Organization (WHO) Pan-European Commission on Health and Sustainable Development, Italian Senator for life, former Italian prime minister, former European commissioner for competition and Trustee of Friends of Europe

King of the Belgians