Western policy in the Middle East has been driving Iraqis to join Daesh, worsening an already difficult situation, panellists told a Friends of Europe Policy Insight.

“The problem started in 2003, when people were expecting that life would change for the better,” said Jamal al-Dhari, President of the Peace Ambassadors for Iraq NGO and a senior Iraqi tribal leader.

“But it got worse.” First Al-Qaeda entered the country, and then Daesh, leading to a problem that is harder to deal with than Saddam Hussein. “We are seeing that terrorism is increasing, which shows that the current way of treating the problem in Iraq is the wrong way.”

The 15 June event examined potential solutions to the terror and violence being unleashed by Daesh, also known as the Islamic State of Iraq and the Levant, or ISIS. The group had been thought to be in retreat, but its latest advances have prompted a reassessment, and Washington is preparing to send additional military trainers to help the Iraqi government.

A major problem was created after the Iraq war, when people who had been involved in Saddam’s regime were removed from government roles, said Souad Mekhennet, a Correspondent on The Washington Post’s National Security Desk. “Army and intelligence people were sent home,” she said.

“They had weapons; they found themselves without a job; and they were angry. ISIS recruited them, which is why ISIS is in good shape. They are very well trained.”

The West is hampered by the idea held in much of the region that it is supporting Iranian militias, said Paul Hamill, Adjunct Senior Fellow at the American Security Project. As a result, people are choosing to support ISIS instead. “This conflict is a political issue,” he said. “If we overlay it with a military answer we’ll make it worse.” 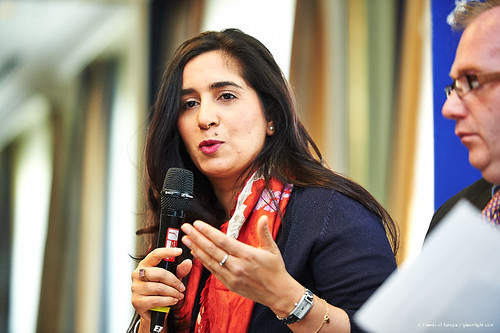